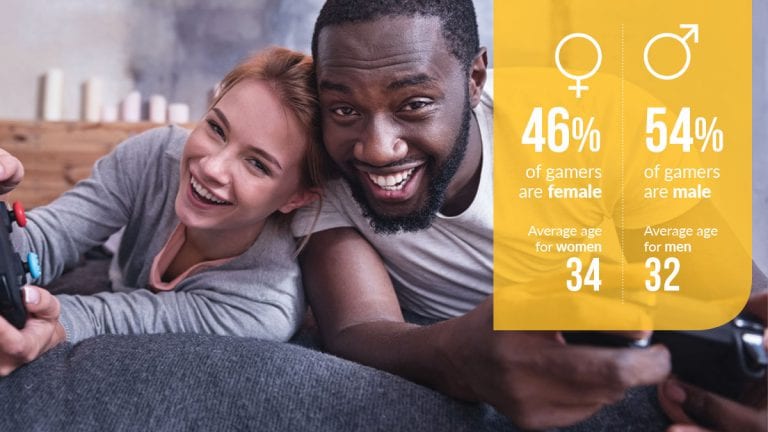 Let us start – as most articles do not – with a game:

Close your eyes… not yet, you won’t be able to read the next bit! In a second, I want you to close your eyes and imagine the first thing that enters your head when I say the word “Gamer”. Okay, go.

Of course, I can’t realistically gather the data, but I am guessing with reasonable certainty, that the majority of you pictured men. I do not hold you responsible for this, we have all done it, and for most it isn’t a reflection of our thoughts on gender equality. There are some amongst you, though that don’t think women have an equal place in the world of gaming (I hope not too many amongst the discerning PC Zone readers), and to you I say shame on you! Saddle up for some learnin’ boy as I show that women play not just an equal, but arguably the most important role in gaming today!

The Surprising Truth About Game Revenue

Game number 2, close your eyes…again, not yet! This time imagine the names of some big game’s companies. Maybe some of you thought of EA or Activision, Blizzard, Ubisoft, Capcom or Nintendo? So, it may come as a shock to learn that Tencent Games, mostly known for Clash of Clans and Honor of Kings, earned more than all of these companies in 2018…. combined!

Yes, it is an undeniable fact, mobile gaming earns more money each year than any other gaming type. In fact, mobile games made up 60% of revenue for the global video game market in 2019, generating $49 billion in revenue and a profit of $16.9 billion.[1]

Games like Candy Crush Saga, Pokémon Go, Honor of Kings and PUBG Mobile have help this impressive market share increase from just 18% in 2012, and the number is only going up.[2]

So how exactly do mobile games generate such impressive stacks of gold annually? One word – microtransactions! When large release, full-price video games try to sneak in ways of generating extra revenue through anything transactional – like loot boxes (cough, EA, Cough), the public end up in uproar – and rightly so. After all, dropping £50 at the time of release is expensive enough, and the consumer rightly believes this entitles them to the full game. Such has been the backlash recently that most major games companies are dropping the idea of loot boxes all together.

“If you throw a frog in a pot of boiling water, it will hop right out. But if you put that frog in a pot of tepid water and slowly warm it, the frog doesn’t figure out what going on until it’s too late. Boiled frog. It’s just a meter of working by slow degrees.”

Similarly, mobile gaming giants have realised that by offering a game for free and then offering many microtransactions to help you speed up progress, people will often neglect to see how small sums add up and end up spending significantly more on the game than they would have a hardcopy video game on release day – à la boiled frog!

That said, it’s not always insignificant amounts as many games are brazened enough to offer bundle packs of items for £99.99, sometimes even more! While most gamers probably wouldn’t spend that amount, certainly not regularly, there is the die-hard few who will, to get to that next stage. Game developers often struggle to juggle the delivery of microtransactions that don’t significantly unbalance competition between players or make them feel extorted whilst also not punishing the more casual non-paying player. It is such a financially rewarding business model, there are increasing amounts of these “Freemium” games hitting market, as pay up front games decrease.

What percentage of all gamers are female?

Though these microtransactions are clearly big business it isn’t the only revenue avenue open to developers. The incorporation of third-party ads into games is also a lucrative practise, with many different ways to incorporate them. Players of mobile games will often encounter ads in a variety of ways:

The Display ad – Right there unashamedly on your screen. Banner ads, static ads, video ads and pop-ups are just some of the variants.

Interstitial Ads – In the words of a well-known wizard “you shall not pass”, as in the round, at least before you watch this 20 second ad. Compulsorily and frustrating!

Incentivised Ads – Watch this, be rewarded. Akin to a monkey learning that pushing a button gets him treats, we have been conditioned to accept the mundane ad for the sweet treat that follows.

Contextual Ads – Integrated right into the game. Like a branded Pokestop or a billboard in Grand Theft Auto, these are usually less obtrusive, but enter the subconscious nonetheless.

So, the long and short of it is that the “not really a gamer” or “doesn’t count mobile gamer” or even “fucking casual”, with their deep pockets are, for all intents and purposes, investing into it more than the supposed hardcore, at least financially. Oh, how the tables have turned. So where do the ladies come into all of this?

Who rules the world…?

Last guessing game – promise. Close your… fuck it, keep them open. What percentage of all gamers are female?

Making up over three fifths of the most lucrative branch of gaming would be an impressive feat alone. This impressive feat is launched into the stratosphere though, when you consider that women are 79% more likely to make in app purchases than men.[4]

In short, women playing mobile games make the singular largest financial contribution to the gaming industry. An industry that is currently more lucrative than both the movie and music industry combined. Almost doubly so!

So, as the most financially milkable sex, why do women make up only 27.8% of the gaming industry workforce?[5] That is a question for another day. But at this moment when we are taking time to clap for keyworkers and hospital staff, maybe we could squeeze in a quick salute to the mighty female gamer.