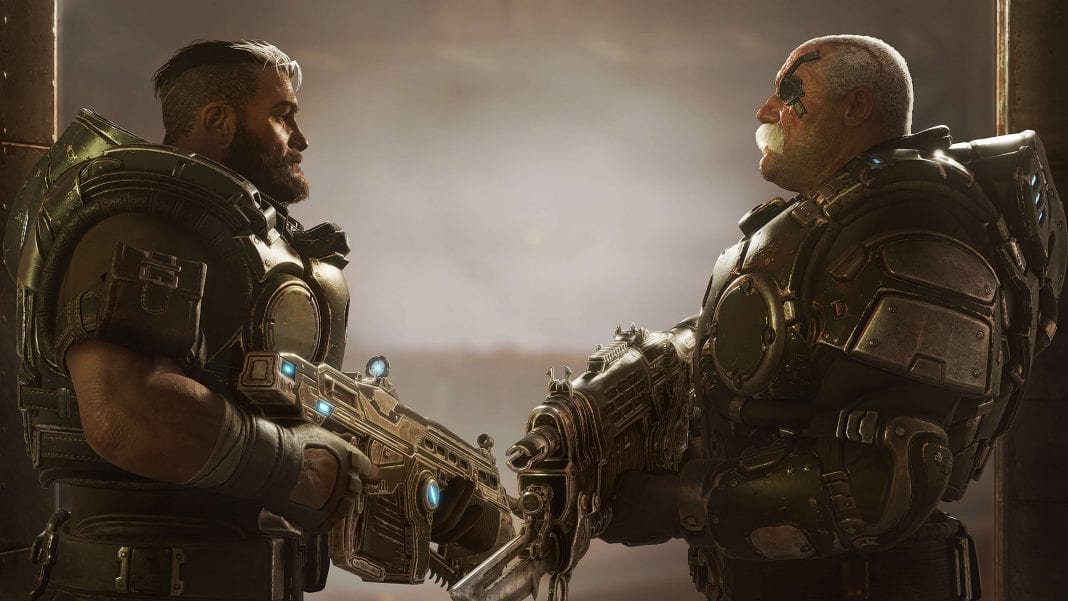 Here are 5 tips for playing Gears Tactics, my nooby friends – they could save your life (not literally, obvs).

Gears Tactics was recently released and threatens Xcom’s crown for providing the humanoids-shooting-creatures-in-a-turn-based-strategy setting. Be you new to such games or a veteran of the style, here are 5 tips to aid you in your Gears Tactics journey.

Before you fire a round, in fact, before you even enter the mission, there is a vital step. Often overlooked in its importance, a well-picked squad can massively improve your chances of success in any given scenario.

Take your time considering the best selection for each mission type. In a control scenario, where you dig-in to hold a couple of objectives, heavies and snipers are worth their weight in gold. The heavy will gain an anchored bonus, while not moving, increasing their stats. Take and well-position a heavy or two in this mission type and you’re halfway there.

In scavenger missions, you are running to grab supplies whilst outrunning a trailing zone of death, as Nemacysts fall from the sky bombarding the area behind you. Here, conversely to the control scenario, vanguards and scouts are probably more of use, as the aforementioned heavies and snipers will never get a chance to dig-in and make use of ongoing positioning.

Why not have a sniper that gets damage bonuses when running and gunning?

Rescue missions also promote urgency with a turn limit to complete (usually about 15 turns). They also often require a single squad member to start out, though you will pick up two more squad members once they are rescued. Sniper and heavies, again, will never get to really play to their strengths and the support class is best – as the name states – in support of other characters. Not that the support can’t work in this mission, as taking a support character will mean less useful skills for the beginning of the mission while you get to the rescue points, but the ability to hand out action points and healing, amongst other abilities later on is useful. Arguably the best all-round classes for these missions are vanguard and scout. Both fast-moving and offensive with the latter having the ability to cloak – if you want to run past half of the enemies encountered.

All that said, you can build your individual squad members in many ways within their skill tree, so the issue is not so black and white. Why not have a sniper that gets damage bonuses when running and gunning?  Ultimately, there isn’t a single class that is redundant in any mission type, but the astute choice may make your life easier.

A simple one here. Look at the terrain, carefully. Again, before a round is fired, you should spend some time looking over the entire mission area. Unlike many games, the fog-of-war in Gears Tactics is translucent rather than opaque. This means, though the enemies will not be visible until you are within a given range, all-terrain and collectables are.

Collectables is admittedly misleading, there is a single collectable – gear boxes, and you definitely want to collect these. Each mission will standardly have two or three gear boxes to grab, often without having to deviate far from the optimal route. These gear boxes are essential for equipping better gear and optimising your characters. As the reward for completing a mission is often one or two gear boxes, collecting them also en-route can double or triple your mission rewards.

Taking time to carefully scout the mission area is also useful in planning squad positioning and approaches. Make use of the ability to rotate the camera 360o as this may offer up alternative routes you have missed before. It is easy to miss a window, door or ladder that you can utilise, or as importantly, the enemy can. Feeling confident you are well locked down before a hench enemy jumps through an unseen entrance is disheartening and potentially costly.

Most importantly, the timing mechanic is turn-based rather than a ticking clock, so there is always the time to scan the map and plan ahead.

Without a doubt, the most important ability in the game. Use it often. This defensive ability provides a cone of death that will activate in the enemies turn, should they enter it. If the enemies cover is providing too good protection and there is no feasible way of overcoming it, overwatch instead. If you are pushing forward, it is wise to have a squad member or two overwatch the most likely directions you could be rushed.

Overwatching shouldn’t just be considered the last action of a turn though. The amount of shots fired in overwatch depends on action points remaining. A well-positioned anchored heavy overwatching the main avenue of the enemy’s attacks with full action points is a glorious thing to behold. In control missions, more than half your actions will likely be this.

Overwatch will also often interrupt the enemy’s action that turn, stopping a beserk-ing drone from hitting you up close. It can also be used as a deterrent, closing off enemy attack routes and halting a potentially dangerous counter-attack.

The utility of this one skill is vast and it cannot be overstated how important it is. There is no cooldown for using it either, so Gears, overwatch away.

This one will become more apparent with experience in the game, but there are a few hints to help you along. Rushing forward recklessly in the open is a sure-fire way to get your characters downed in this game. Cover is your friend and you should advance up cautiously behind it. I prefer the leap-frogging motion of having some squad members provide overwatch protection as others push forward.

Eventually though, you will hit a block of locusts, well covered and dug-in. Rushing them is tantamount to suicide and your success will depend on getting your squad members into good firing positions and taking carefully thought out shots. When the odds are low, overwatch, wait for them to advance and take them out systematically. That said, it is very feasible to get locked in a stalemate of both sides overwatching and not advancing. Even in these moments where you come across heavy fortified enemies you should consider position adjustments to increase your likelihood of hitting. Advancing one or so squad members around flanks is also advisable, just don’t be so bold that said members wander straight into the danger zone.

Where there are missions with turn time restrictions, long drawn out gun battles might not be feasible and more daring play might be required. That said, the turn limit often accounts for you having the main engagement last a few turns, so don’t kill yourself unnecessarily. Pushing some characters close enough to lob a grenade to take out a bunch of hunkered down well defended enemies can break the stalemate very quickly.

Execution opportunities will often dictate when to push forward. Performing an execution provides an extra action to all other squad members. Chaining a few together can massively boost your sides actions and provide an excellent chance to push forward or have a good turn wiping enemies. As the game is turn based, rushing a squad up to execute an enemy amongst other healthy enemies may seem reckless, but it is only so if you don’t use the extra actions to wipe them out before their turn begins. Extra actions and free actions are huge in this game and any opportunity to get them via gameplay or skill unlocks is a must.

Talking of pushing forward, while the fog-of-war stands, be careful about rushing a character up to its full move in one click. Moving in increments between cover may reveal more enemies along the way, giving you the opportunity to rethink your actions and avoid finding yourself in a dire situation. The incremental move also gives you more control on the route your characters take. This will help you avoid enemy overwatch cones, mines and aggressive enemies.

1: The Right Tool for The Job

Learning the skills and weapons of your squad members is essential for optimal play. You have access to each character’s passive skills at all time to remind you of their capabilities. All unlocked unique skills will have a cooldown period when used and so it is important to use them wisely. That said, it is important to not hang on for the most opportune moment, as all skills cooldown, each skill should be able to be used at least twice in any given mission, often many times more.

Grenades are invaluable at closing emergence holes and wiping hordes in close proximity, but holding on to them solely for this is a mistake. You will often have multiple squad members with frags, so use them often. There are occasions where fragging a single combatant is even worth it. Particularly if they are too well covered and halting progress or they are pinning another of your squad members stripping you of activations. Taking your time on positioning that grenade toss especially with multiple enemies, as the smallest nudge of the mouse might get you that extra kill.

As more skills unlock, so does your toolbox for each character

On top of learning each skill and the best scenarios to use them is the planning ahead in skill-building initially. Certain skill unlocks will have great synergies with others resulting in some powerful plays on the battlefield. Each skill tree will have paths leading to two different general playstyles for each class, so try experimenting with taking some of each, or going solely one or the other. As you unlock increased squad slots and multiples of each class, you can level up characters uniquely to create some bespoke play styles.

As more skills unlock, so does your toolbox for each character. This will create more opportunity to use abilities resulting in effective and satisfying actions. With early character actions being manageable to grasp and more elite enemies unlocked gradually, the learning curve isn’t too steep, thankfully. So, enjoy yourself as you overwatch, execute and obliterate away!

We included an Amazon affiliate link in this article – if you purchase something using it we may get a chunk of change.