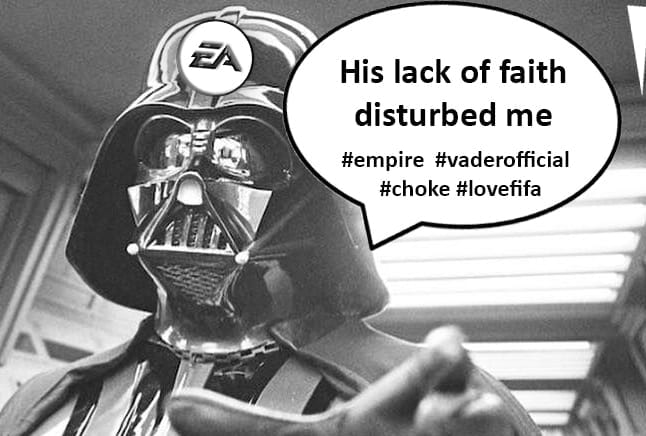 Anyone who saw the latest Star Wars film, or most of the previous ones for that matter, will be familiar with the old troupe that the forces of good will always triumph over an evil Empire.

This may be true in mainstream fantasy, but in reality such Empire’s rarely disappear – take EA and the consistent failure that is FIFA as a credible eSports game, for example.

Now don’t get us wrong, we enjoy a bit of FIFA – just like we enjoy a filthy kebab after a night out on the lash. But we wouldn’t eat a donner for every meal just as most gamers don’t invest too much hope in FIFA being good for their health when it comes to competitive multiplayer.

None felt so strongly about this than serial bad mouth (and general weirdo) Kurt ‘Kurt0411’ Fenech, a man more famous for his rants against EA than his actual gaming skill. As a result of his latest and most bizarre-to-date tantrum, which culminated in him literally spitting on an EA logo, the imperial publisher saw fit to ban him from all online interactions in all of their games for life. Ouch.

We’re not condoning Fenech’s douch-baggery but he does have a point. FIFA is most famous among gamers for its highly dubious behaviour that aims to control the outcome of matches, seemingly at random – better known in the community as ‘scripting’. If you’re skeptical check out the video below for some glaring examples of the game acting extremely suspiciously:

Games of the past would often employ these sort of automated mechanics to frustrate a player’s progress, and some still do (we’re looking at you Mario Kart!) but for a game that is trying to be a competitive eSports title such randomness that is totally out of the player’s control is simply not acceptable for its results to be taken seriously.

Not that EA seem to care – with all of the official licenses tied up and a huge mountain of cash to pump in there’s virtually no hope of any serious alternative coming along to put the deeply- flawed FIFA series in its place.

EA may be able to silence one demented Rebel, but they can’t defeat us all. Our advice? Take the game in moderation, just like that juicy (yet obviously dodgy) kebab.