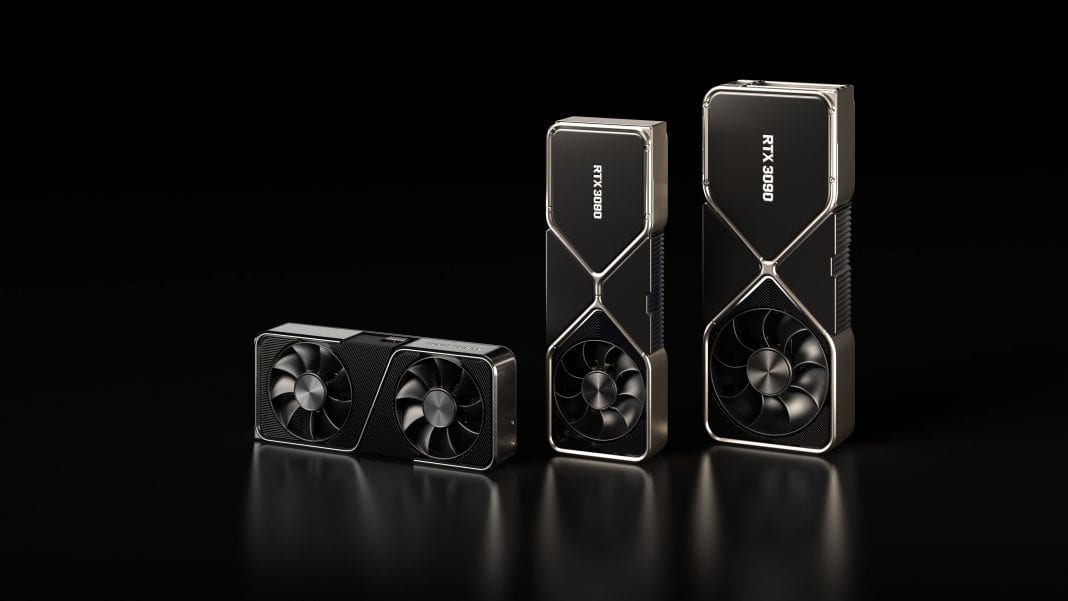 Nvidia were always likely, to a certain extent, to spoil the next-gen console hype when their highly anticipated 3000 series 2nd gen RTX GPUs arrived this autumn, but no one expected the performance leap to be so big as to make the grown men at Sony and Microsoft weep buckets of despairing tears – but I imagine they’ve done just that.

Based around a new 8nm fabrication from new partner Samsung (replacing TSMC) the ‘Ampere’ RTX 3070, 3080 and 3090 were just revealed and, if the early numbers are to be believed, look to deliver the biggest generational leap in Nvidia’s history – bringing close to a 2x improvement in most scenarios.

As is customary with any shrink in fab size, down from Turin’s 12nm to Ampere’s positively minuscule 8nm, a 2x improvement in thermal performance and lower power draw is the icing on the performance cake. After all, gamers are bound to push these monster cards hard in those tiny ITX cases everyone is so fond of nowadays, so any and all improvements to thermals will be very welcome.

So what’s so special about performance?

Ok let’s get straight to the point. The class-leading Titan-esque RTX 3090 card can run at 8K resolution, 60 frames a second (With a bit of help from DLSS). Seriously, we’re not shitting you, check out the in house demo to see for youself:

Obviously, this was a controlled environment promo video, but it stands to reason Nvidia wouldn’t make such an insane performance claim without it being possible to achieve. Not that many will get the chance to test it for the time being as 8K TVs are very much luxury products and 8K monitors just aren’t even a thing yet. Still, it’s good to know a 3090 will be a good investment for the future, helping to justify that mad £1400 price tag.

3090 includes a whopping 24GB of GDDR6X memory and what Nvidia are calling their “flow-through” cooler, which they claim will keep the card up to 30°C colder than a previous gen Titan RTX while delivering up to 50 per cent more performance.

Going for the mainstream enthusiast territory is the RTX 3080. Sporting much less memory (10 GB GDDR6X) and lower throughputs than it’s larger cousin, the headline here is performance is touted as double that of an RTX 2080Ti, a card which cost almost as much the new 3090 – except the 3080 will cost only £650. A very reasonable price for a ridiculous level of performance. Gamers should see this as their best choice for 4K 60 FPS, maxed-out-gaming going forward.

And finally there is the 3070, which you might consider unworthy of your attention but hold on, Nvidia claims that this card, despite having only (ONLY lol) 8GB or GDDR6 memory and far fewer cores will STILL outperform an RTX 2080Ti – at a cost of just £450. Wow.

Oh, and to top it all off, Ray Tracing has also been improved, with double the performance of Nvidia’s first-gen RTX ‘Turing’ cards.

Where does this leaves next gen consoles?

Well, we at PC Zone care little for the fate of consoles, but since you asked we don’t honestly think Nvidia’s bombshell performance figures will screw them too much. It may put off some more serious enthusiasts, especially the new Xbox, as a PC with games pass is essentially the same thing. But consoles always have unique gameplay offerings, a tight and consistent ecosystem and a loyal snotty-nosed brand following. These factors will drive the majority of sales come Christmas 2020, and beyond.

As for Nvidia? We salute you, you bright green visionaries you. We can’t wait to get our grubby mitts on your new cards. As for the competition? Well they’re certainly going to be green with envy…