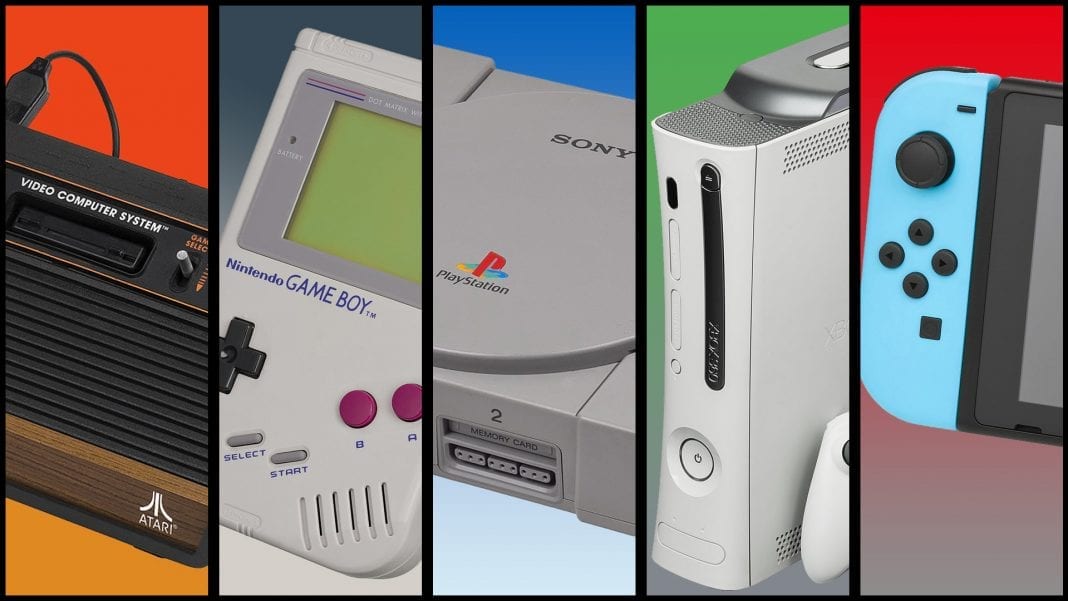 The greatest consoles of all time!

It’s a question as pointlessly subjective as it is fun. How do you define greatness? If total sales numbers are your mustard, then PlayStation2 is the undisputed champion. Or if you prize innovative features that were ahead of their time, then the short-lived but spectacular Sega Dreamcast must have the title.

But what about the game changers? The consoles that completely altered the landscape of gaming. These systems were not usually the most highly developed examples of their respective generations. They weren’t meant to be.

To use an analogy, these game changer consoles were like Elvis recording That’s All Right at Sun Studios in 1954. Elvis was a better singer by the time he recorded Suspicious Minds in 1969, but those sessions 15 years earlier got him started and made possible everything that followed.

So, my friends, come on a fast journey down memory lane with me. We will delve into 40 years of rich, creamy gaming history and look at 5 incredible consoles that changed the game!

The Atari Video Computer System (later Atari 2600) was the gaming industry’s first killer hardware solution. Before the VCS, gaming was stuck in its prehistoric era. A home game system was cumbersome and unwieldy. Worse, each system was able to play just one title. Like having a crap arcade machine in your living room.

It was clear that for the gaming industry to grow, little gamers had to be able to occupy their short attention spans with more than one title. Thus, the ROM cartridge was born! Although the now mostly forgotten Fairchild Channel F hit the market about a year before the VCS, it was Atari’s gorgeous, wood-veneered “Heavy Sixer” that popularised gaming via ROM cartridge.  Ahhhh, Space Invaders!

After the 1983 video games crash decimated the industry, Atari’s powers waned. Nintendo’s mighty NES and Sega’s underrated Master System pushed the 8-Bit graphics envelope to the it’s extreme. Later, the titanic war of supremacy between SNES and Mega Drive/Genesis took Atari’s original 2D ROM Cartridge concept into another galaxy. But none of it would have been possible without the Atari VCS and it’s ROM cartridge-based architecture. In the late 1970s, the VCS/2600 changed the game.

Any child of the 80s will remember Nintendo Game & Watch. A charming case design and one or two screens depending on the game. I lost many hours of my life in 1988 playing Snoopy Tennis while my brother took on the bright orange, dual-screened challenge of death that was Donkey Kong. But much like their living room counterparts of the mid-1970s these handheld systems only played one title.

As Nintendo were the undisputed kings of handheld, they decided to do for handhelds what Atari had done for home consoles. Originally called Dot Matrix Game, the Game Boy allowed for all the enjoyment of Game & Watch while allowing players to collect a whole library of games for the system.

In all honesty, Nintendo shouldn’t have won the handheld war in the late 1980s. A handheld ROM cartridge-based system wasn’t a unique idea. The Atari Lynx, Sega Game Gear and NEC Turbo Express were all better looking and technically superior. But despite being the only system not to boast a full colour screen, Game Boy was brilliant in one vital regard: battery life! This longevity combined with killer games like Tetris and Super Mario Land put Nintendo over the top. In the arena of handheld consoles, Game Boy changed the game.

The early 90s console war between Sega and Nintendo was a beautiful thing to be a part of. Those 16-Bit machines were the zenith of the 2D ROM Cartridge revolution started by Atari. But by the mid-90s an entirely new way of programming games had emerged. This gaming revolution would initially confound Nintendo and ultimately break Sega. And the revolution would be in 3D.

No one took Sony very seriously when they bounced their ill-fated partnership with Nintendo into a new company: Sony Computer Entertainment. With hindsight it is hilarious to think that, in 1994, Sega were more worried about the Atari Jaguar than the PlayStation! To say Sony had the last laugh, would be an understatement akin to saying Metal Gear Solid is a half-decent game.

PlayStation was designed specifically with 3D gaming in mind. It’s straightforward architecture and optical drive made it easy and cheap to program for. Sony drove their new system straight through a commercial gap opened up by Sega Saturn’s problems and N64’s delay. Within 5 years PlayStation had flattened the opposition, ushered in a new era of 3D graphics that persists to this day and, most importantly, changed the game.

The first XBOX had an outstanding debut. It’s 24 million units sold eclipsed both Sega Dreamcast and Nintendo GameCube. But that success paled in comparison to the unstoppable juggernaut that was Sony PlayStation2. For the XBOX sequel Microsoft needed an edge. That edge was XBOX Live.

When XBOX 360 (the first in a long line of stupidly named Microsoft platforms) launched in 2005 it should have sunk without a trace. Why? Because never in the history of gaming has a console been so unreliable at launch. I don’t know a single owner of the original platform who didn’t enjoy the “red rings of death” at some point.

But with PlayStation3 suffering teething problems Microsoft sensed an opportunity and rushed XBOX 360 to market. They knew that no company had managed to integrate online gaming as a core feature of a home console. XBOX Live changed that and ushered in the generation of FIFA and COD players that middle-aged hacks like me find so confusing. For all that the 360 hardware was comically fragile, XBOX Live was so robust that every platform since has had to make online play a fundamental feature. 84 Million sales meant two things: Microsoft had arrived, and XBOX 360 changed the game.

Since the early 1980s gaming has meant one of two things: you play in front of a TV or you play handheld. Even the coming of internet gaming in the 2000s didn’t alter this fundamental division. As handheld gaming masters, Nintendo was keen to alter this perception. The question facing them was how?

The wildly successful (though now oddly dated) Wii had found Nintendo a brand-new installed base of casual gamers. The Wii U was an attempt to solidify that base with a console that worked both as a handheld and a TV system. That it didn’t work was more down to Wii U not having enough power to deliver on Nintendo’s ambition than the concept being flawed. Unfortunately, 90million of the 100million installed base for Wii found Wii U confusing and unwieldy and stayed away.

The thing about Nintendo is they are as stubborn as they are creative. They knew that a system that combined Wii’s playability with the portability of their DS handheld would be a killer platform for the 2010s. So, they broke with the normal cycle of console generations and released probably the most innovative home console since the Atari VCS: Nintendo Switch.

Switch is the gaming equivalent of lightning in a bottle. It is as good a handheld as it is a TV console (thus avoiding the trap that claimed Wii U) and it’s ridiculously simple to use. It’s also different and exciting in a way that doesn’t allow Sony and Microsoft to just pivot their current hardware to mimic. Combine this with the strongest first party line-up of titles in gaming and you have not only the most innovative and original system hardware in 40+ years: you have a console that changed the game!

What do you think? Do you agree with us? Are these the most influential, game-changing consoles of all time? Maybe you would rather this list consisted of: Vectrex, PC Engine, N64, Wii and PSVR? Get involved in the comments section and tell us which console systems you think changed the game.