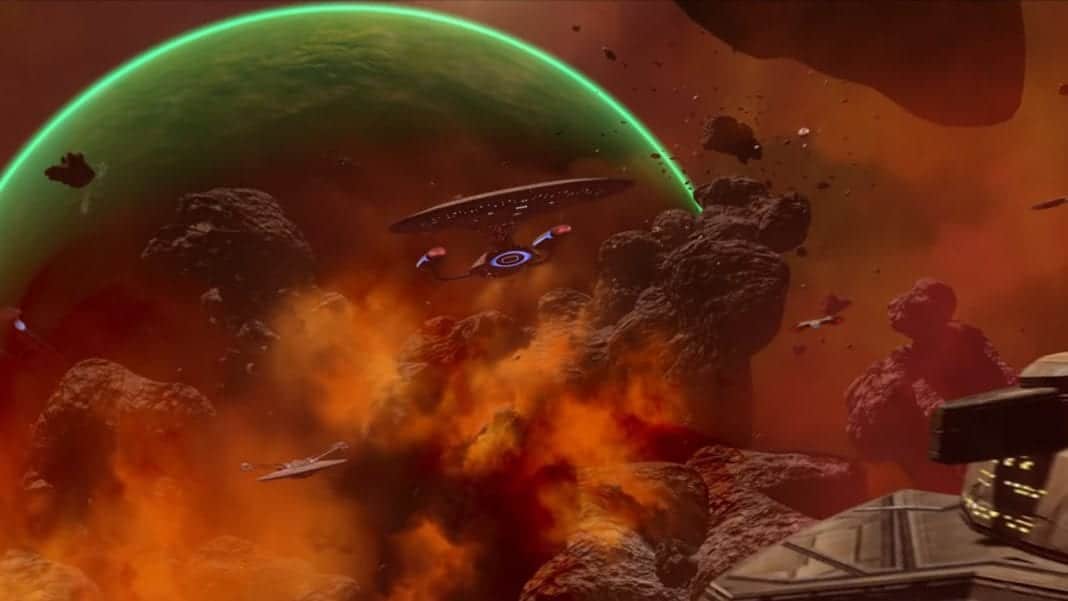 Space the final frontier…these are the voyages of the Starship Enterprise…It’s continuing mission…to destroy strange new worlds…to burn all lifeforms and annihilate civilisations…to boldly kill where no one has killed before.

Thus spoke no episode of Star Trek ever.

Whatever your opinion about Star Trek’s 700+ hours of TV and 13 feature films, most would agree that Gene Roddenberry’s vision was always one of peace. Why is it then that all the most recently released Star Trek video games are so…well…violent?

There’s no better fictional universe full of heartwarming potentials than the Star Trek universe. Talk about writing fan fictions or games, this universe offers you a chance to feel like you’re a part of it. And games- so many are out there! From online shooting games to Star Trek Slots, this universe can bring you anything. If you’re into slots, Heart Bingo Promo Code is something you want to check out. Although, not all the Star Trek games are as successful as you’d think. They might make you feel like you’re a small part of the universe, but not all them can be called legendary.

No TV show has had as much attention lavished on them by video game developers as Star Trek. As of 2020 there have been 92 games devoted to the adventures of the USS Enterprise and her many spin offs. That’s an astonishing number of titles for any franchise. The first game, a text adventure imaginatively called: Star Trek, was released way back in 1971!

After a slew of home computer-based fare throughout the 70s and 80s on everything from the Apple II to Commodore 64, the 1990s saw the arrival of Star Trek Video Games’ Halcyon period on the PC. Adventure games and RTS simulators came thick and fast. I personally have great affection for Star Trek 25th Anniversary and Star Trek TNG: A Final Unity. These were terrific adventure games that also featured all of their respective casts providing their voices! Crucially these games emphasised exploration and critical thinking. You couldn’t just blast your way out of trouble.

On the subject of blasting, it’s a fact that Star Trek has always had a somewhat ambivalent relationship with war and armed conflict. On the one hand Gene Roddenberry was adamant that Star Trek’s central focus should be on humanity growing past the need for war. On the other hand, the conflict provided by a pitched battle makes for great drama. Just compare Star Trek: The Motion Picture with Star Trek II: The Wrath of Khan and tell me which one is the more engaging film. It’s not the one with brown uniforms and a giant cloud for an antagonist is it?

Through the 90s this issue didn’t matter much though. In that era, Star Trek was so confident in what it was that the games made about it balanced elements of adventure and combat pretty well. Starfleet Academy, for example, found a way to focus Starship combat through the prism of a cadet learning to make life and death choices. Birth of The Federation required the player to understand the culture of different species in order for their strategy to succeed.

So, why don’t we get Star Trek games as good as that now? Well for one thing, gaming trends change. The absorbing Adventure Puzzle games of the 1990s didn’t survive as the destinies of PCs and Consoles converged in the 2000s. And ironically, two hugely successful Star Trek games released at the turn of the century might have accelerated this process. In doing so, Star Trek games began to drift away away from mysterious exploration into more mindless action.

If Gene Roddenberry were alive to see games like 2013’s Star Trek, he’d be weeping into his Romulan Ale!

Star Trek: Voyager – Elite Force was one of the earliest Star Trek games to embrace a First-Person Shooter design. It was very well done (whether you like Voyager or not) and got well deserved critical praise. But it pushed Star Trek into a type of game much better suited to the swashbuckling fantasy of Star Wars.

Starfleet Command was a conversion of a tabletop game (Star Fleet Battles). While it’s requirement for strategic thinking was very much in keeping with the source material, Starfleet Command continued a trend towards Starships battling instead of exploring. As with Elite Force, Starfleet Command indicated that the line which divided action packed Star Wars games and more cerebral Star Trek titles was becoming blurred.

Then the 2003-04 split between Activision and Viacom effectively killed off the chance of any new Star Trek games for some time. By the time devlopers were ready to return to the franchise at the end of the 2000s, the show was no longer on TV; the mammoth run beginning in 1987 with Star Trek: The Next Generation was brought to a close by Enterprise in 2005. A new generation of Trek games was now waiting to be based around JJ Abrams’ 2009 reboot film. It is perhaps fitting that as cinematic Star Trek veered ever closer to the all-out action of the Star Wars films that Star Trek games should be ever more focused on battling and destroying enemies.

Star Trek DAC (Deathmatch, Assault, Conquest) has become the template that most developers seem to follow now. Instead of exploring the rich sci-fi universe created by over 30 seasons of mostly excellent TV, the idea for modern Star Trek games is to give you as many different ways of blowing your enemies up as possible. If Gene Roddenberry were alive to see games like 2013’s Star Trek, he’d be weeping into his Romulan Ale!

While aspects of the well realised Star Trek Bridge Crew VR offer a glimmer of hope, the hard reality is that a genuinely good Star Trek game hasn’t been released on any platform in nearly 20 years. 2010’s Star Trek Online was called “bland and shallow” by Game Spot. They did note that the space battles were good though (yawn!) Perhaps the time for high quality Star Trek video games has simply passed. In the era of steroid-enhanced CGI storytelling seen in the Marvel Cinematic Universe and recent Star Wars films, perhaps a more thoughtful sort of space adventure has no place anymore.

On that rather depressing thought, I advise all you true Trekkies out there (I refuse to refer to myself as a Trekker) to get on Steam and grab Interplay’s Classic Star Trek Collection. Let’s face it no new Star Trek title is likely go any more boldly than those 90s classics anytime soon…