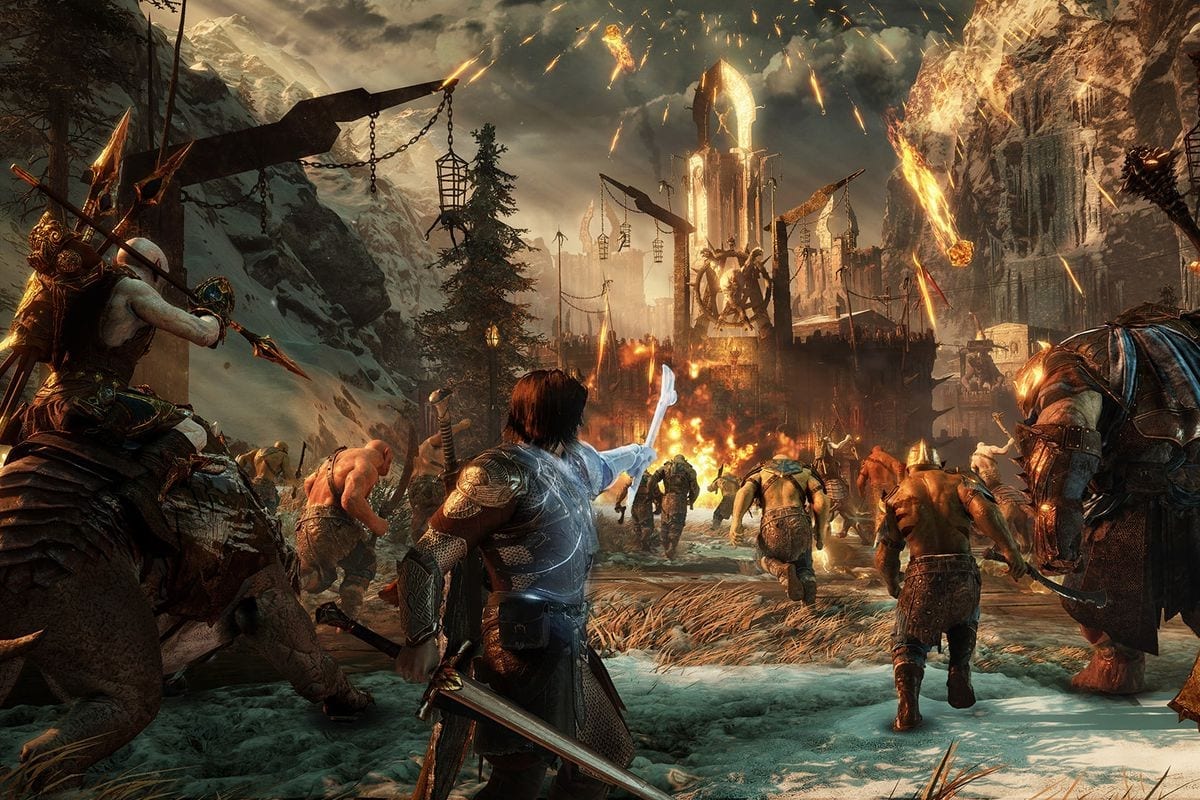 “Good artists copy; great artist steal.” It is a phrase attributed – probably wrongly so – to many people of importance over the years, William Faulkner, T.S. Elliot, Pablo Picasso and Steve Jobs amongst them.

A better version of this was penned by a W. H. Davenport Adams who wrote in The Gentleman’s Magazine, “That the great imitate and improve, whereas the small steal and spoil.” Now admittedly Adams was talking of poets, but then this was 1892, an age where Nintendo had been in business for three whole years making playing cards, but were still nearly a century away from making consoles.

Surely the great neither steal or copy though? Isn’t invention and innovation the hallmark of greatness? Regardless of how you measure greatness Shadow of War, the recently released Lord of the Rings mythology follow up to Monoliths Shadow of Mordor, is great – and it has invented, copied and stolen!

We shall start with the claim of copying, not least because its the most tenuous. Shadow of War is an open-world  fantasy adventure, where you run around beating up endless hordes of enemies whilst completing story missions, side missions, finding collectables, etcetera etcetera blah blah blah. In this, it is no different from many titles of the same format, most notably Assassins Creed and the Arkham series (though more on them later). But this is hardly a punishable crime. There are only so many ways to display such a format and if it ain’t broke, why try to fix it? It is a template used by many before and since, and to try and deviate would be akin to asking a platformer to not use platforms or to try and remove a steering wheel and gears from a driving simulator, just for the sake of it. The maps, fast travel points side menus, tech trees and all such things are pretty much standard, and Shadow of War does it no better or worse than all other comparable games. 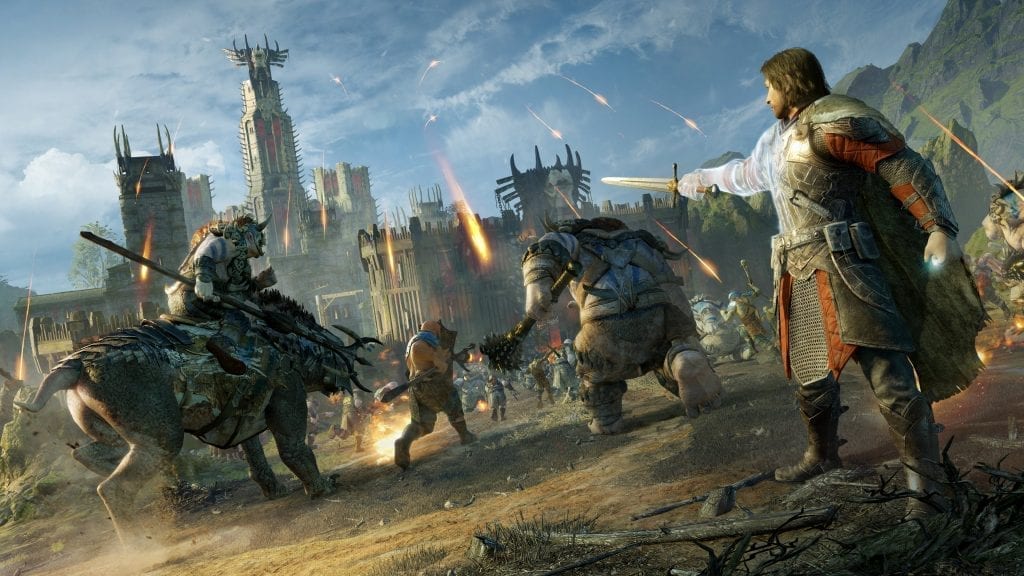 Far more blatant on the plagiarism front is the combat system, shamelessly lifted, almost without change from the Arkham series. 2014’s Shadow of Mordor was a smash hit, a fantasy open-world game that had it all, including the best designed combat system ever created for such games. Of course this design was not their own, Monolith’s game design team openly admit they were heavily influenced by the fighting system debuted in 2009’s Arkham Asylum. Some may argue this is theft others a loving homage, and though my opinion is far closer to the latter, I’m mostly indifferent. Not out of biased apathy due to my clear love of both the original Shadow of Mordor and its follow up, but due to the fact that this is the cost of doing business.

Though they have increased in number over the years, console controllers have a finite amount of button combinations and ways to utilise them. Is the Shadow series combat system a direct lift of the Arkham series? In my humble opinion, yes – but I don’t care. It is an excellent system and with no laws preventing it, the more pertinent question is why haven’t more games utilised it?  Most games do not reinvent the wheel, they are happy to add new spins to existing ideas and create the best gaming experience available. When innovative ideas are created, they are simply added to the proverbial pot for other companies to play with. As such, I would have expected far more riffs on this much loved combat system, and am slightly bewildered there are so little. None of this compares to my incredulity, though, of the most pertinent question of all…

Why the hell has no-one copied the Nemesis System?! Shadow of Mordor’s design team really hit the ball out of the park with this one. Though grinding through endless hordes of orcs is part of the fun of the original Shadow game, it is the encounters with the orc captains where it really comes alive. With fantastic names, design, voice acting and specific strengths and weaknesses, it is the crux of the game, and while gloriously defeating a captain in combat is satisfying, the real fun comes from the consequences of losing to a captain. He will rise in rank, often receiving a new title inspired by the way he bested you. More-so, he will remember you and revel in taunting you in future encounters, of course these can be chance led, or you can purposely head out to find your nemesis in revenge driven missions. Lose too many times to a single captain and you can create a veritable tank of ludicrous stats near nigh impossible to defeat.

Draining intel from lesser “worm” orcs, you are able to unlock information on the differing weaknesses of the numerous captains. Aversion to fire, poison, stealth or particularly squishy from ranged attacks, each nemesis has his Achilles heal. This is barely the tip of a complex system that – in this day of AI making leaps and bounds – creates multiple antagonists that you have a vested interest in beating. That it has sat un-plagiarised for all these years is a miracle and also a disappointment, as many games would have been substantially improved by a variation on this excellent theme.

I had such love of Shadow of Mordor that it became the first game I ever platinum-ed.

With the release of Shadow of War comes the Nemesis System 2.0 – as nobody else has called it ever. Not deferring from the near perfection of the 2009 breakthrough comes extra functionality rather than difference. Now the game plays like a two act story, with the later game allowing you to recruit orcs to your cause, arrange raids on fortresses and then hold and defend said fortresses against would be usurpers. You can send dominated orcs to infiltrate fortresses and cosy up to a war-chief, gaining his trust so that he may better stab him in the back further down the line. They can be trained and improved in the orc fighting pits or learn new skills to better them. They can go on assassination missions or merely spy from the shadows. Such is the variety in the latter half of the game, that a huge swelling of satisfaction is to be earned form how your orcs are placed and how many regions you control. To touch on all the facets of this intuitive yet advanced system would be to fan-boy way too hard and create a vast narration that would likely alienate readers eventually. Suffice to say, I had such love of Shadow of Mordor that it became the first game I ever platinum-ed. A feat I hope to achieve with this title, though the sheer vastness of the game hints that this may be unfeasible.

Of course, like many players I am frustrated that completion is greatly aided by micro-transactions, with chests available to buy that greatly improve the speed at which it would be possible. My strong feelings on how micro-transactions are best left to cheap or free-to-play mobile type games are probably best saved for a different article, besides, a good look at this growing trend is thoughtfully explored by Jim Devereaux in this recent article here. 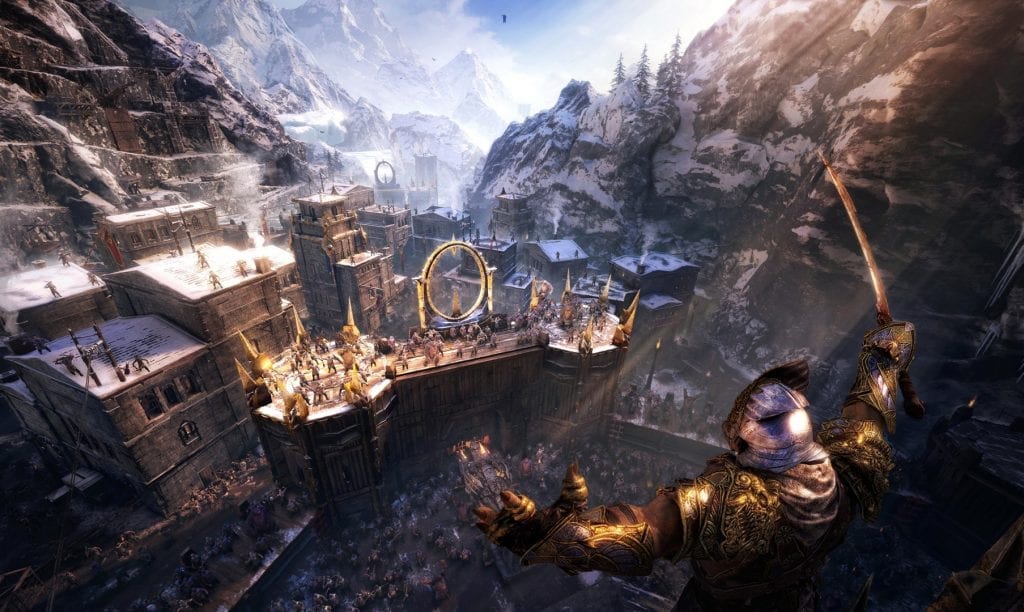 So instead, I will end on a positive note. Though the innovation displayed is no longer fresh and exciting this game perfectly follows on like a second chapter of an ongoing saga. Improving on systems where it can and adding fresh new ideas to an established brand, Monolith have once again struck gold. Though I have many more hours yet to play, I already rank this as one of my firm favourites of the year and even of all time. So grab a copy if you haven’t already done so, I’m off as I need to return to Shag the Singer. Thankfully this is a noun rather than a verb. Happy gaming.