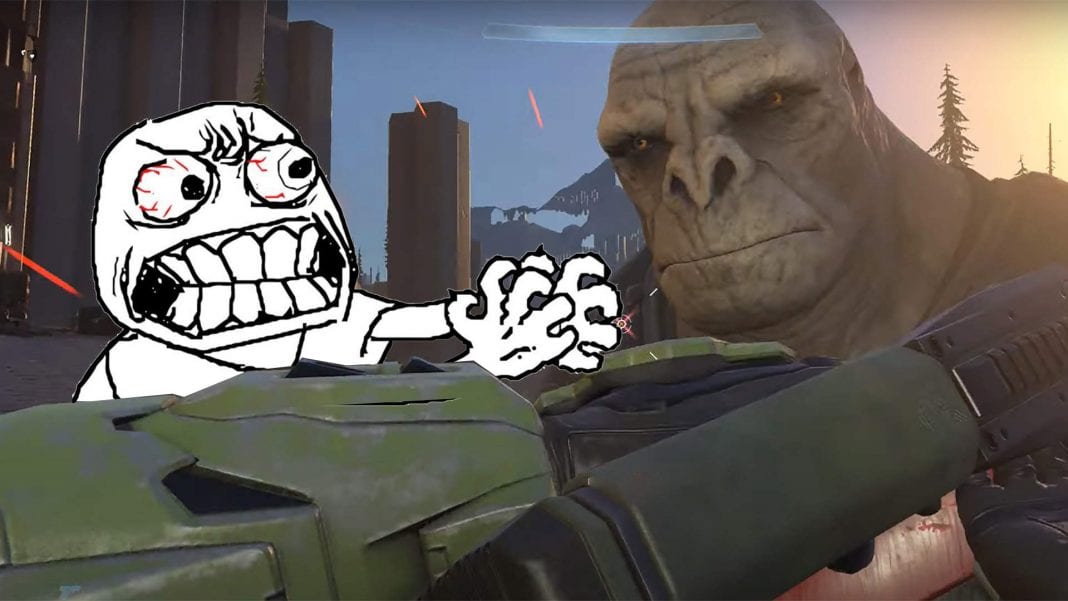 Xbox Series X game demo was running on a PC and looked utterly uninspiring to anyone who was hoping for a ‘generational leap’ in graphics quality.

I’ll admit it right off the bat, I’m a bit biased as I’ve never really liked the Halo games that much. I appreciated the quality of gunplay (especially when Bungie was on board) but as a ‘story guy’, I have always found the games dull and plodding.

That said I’m trying my best not to let my own disinterest in the franchise colour my views on this demo. The story could be dank as fuck as the youths might say – but today that doesn’t matter, we’re just talking graphics.

First off, if you haven’t already, check out the demo below and see for yourself:

What you reckon? Pretty meh isn’t it…

Nothing jumps out as next-gen. The lighting is flat and lifeless, especially in shadow (more on that in a minute) there’s tons of texture pop-in, objects don’t self shadow, the aesthetic is neither cartoony nor lifelike, but stuck in between. It’s a mess of uninspiring-ness.

So what the hell is going on??

There appear to be some design choices that are limiting the impact the game visuals could have. Here’s some detail about the major offenders.

Halo Infinite uses a fully dynamic lighting model, which is quite unusual. Alex Battaglia wrote an excellent piece on eurogamer about this and sees it as the single biggest issue people have with the game’s graphics as they stand right now.

On the plus side, dynamic lighting is a boost to realism as it continuously refreshes all objects lighting properties relative to the lighting source, without having to tediously rework shadows and other lighting properties in an approximate fashion, that a traditional static lighting model entails – it’s therefore far less labour intensive for developers and it allows time-of-day changes in-game to be implemented seamlessly.

However, the technique is very expensive to render, and as Alex says: “…much of the gameplay segment is taking place in shadow and that’s a problem because as a general rule of thumb, video game graphics are weak in accurately representing areas in shadow. Not only that, but in a world where games are mostly using physically-based materials reliant entirely on their interactions with light, the texture assets won’t look at their best either.”

No Ray Tracing (yet)

We’ve all seen how impressive ray tracing can be in improving the realism of a scene. If you need reminding check out an example in the video below from the game Control:

If Halo Infinite combined a direct lighting model with some form of ray or path tracing, it would dramatically improve the realism of the lighting in shadows, which is where the vast majority of the Halo Infinite demo takes place. This is because ray tracing uses algorithms to actually simulate light rays, tracing the path that a beam of light would take in the physical world. This lets developers make virtual rays of light appear to bounce off in-game objects, cast realistic shadows, and create lifelike reflections.

To be fair to 343 Industries and Microsoft, they say that a ray tracing patch is coming to Halo Infinite at some point down the line. Just how effective the implementation will be could depend largely on what they do about the following performance target, which could prove extremely difficult to hit without further graphics compromises…

Ever since the Xbox One X was launched Microsoft has proudly talked up the native 4k resolution capabilities of their flagship console. The Xbox Series X appears to be no exception. The problem with such a rigid target is how do you go ‘next-gen’ by massively increasing lighting quality, texture resolution, effects processing and draw distance, and still hit that target – even with 12 teraflops of GPU power at your disposal?

The short answer is, you don’t! At least not yet.

We can all understand the need to hit a 60fps target in a Halo game. It’s fundamental to the quality of the experience that you need a decent frame rate. But 4k resolution? Is that really necessary?

Upscaling and re-compiling techniques to make lower resolution rendering look as good as native 4k have come on leaps and bounds in the last year. Seriously, check out the example below:

If you ask any serious gamer what they would rather, a high frame rate or high resolution, they’ll take the frames every time.

By dropping the requirement for a native 4k presentation in favour of a dynamic resolution solution, 343 would have a load more performance on the table to remedy some of the other issues in this game demo, namely…

First is bad circles (those octagon-shaped wheels and other round objects seriously break the realism) second is jaggie-edges (aliasing can be chronically distracting even in native 4k titles like the recent Forza racing games) and last but not least, texture pop-in. Fortunately Halo Infinite seems immune to the first two, but a chronic sufferer of the last.

There are numerous points in the demo that show painfully obvious pop-in of distant objects (particularly fog maps) and even close up pop-out of whole areas of grass as the camera pans away from those areas. Here’s an example from the gameplay footage:

This could be the result of poor optimisation of the game several months from launch, or a more serious problem related to that hefty and unnecessary resolution target. Whatever the case, it makes the graphical presentation of the game stick in the mind for yet more of the wrong reasons.

Can these issues be fixed in time for launch?

That’s a complicated question, as it assumes Microsoft see the ‘problems’ the way we see them. 343 Industries have stated that this is to be the last standalone Halo game the studio will develop, with a slew of add ons and expansions planned over the next 10 frickin’ years. If that’s true, the fundamentals of the game’s design need to be solid for a long time to come, which may explain the fully dynamic lighting approach. It’s expensive now, but may well be the norm a few years down the road.

And as I previously mentioned, Microsoft seems determined to tout native 4k as a major selling point for their next-gen flagship the Xbox Series X. For better or for worse.

With these factors in mind and assuming the company doesn’t change its approach, I can’t see the graphics in this new Halo game-changing in any drastic way.

There will of course be improvements before launch, and a ray-tracing patch will definitely help matters, but unless you’re playing on a proper monster PC rig, Halo Infinite ain’t gonna look all that this Christmas.