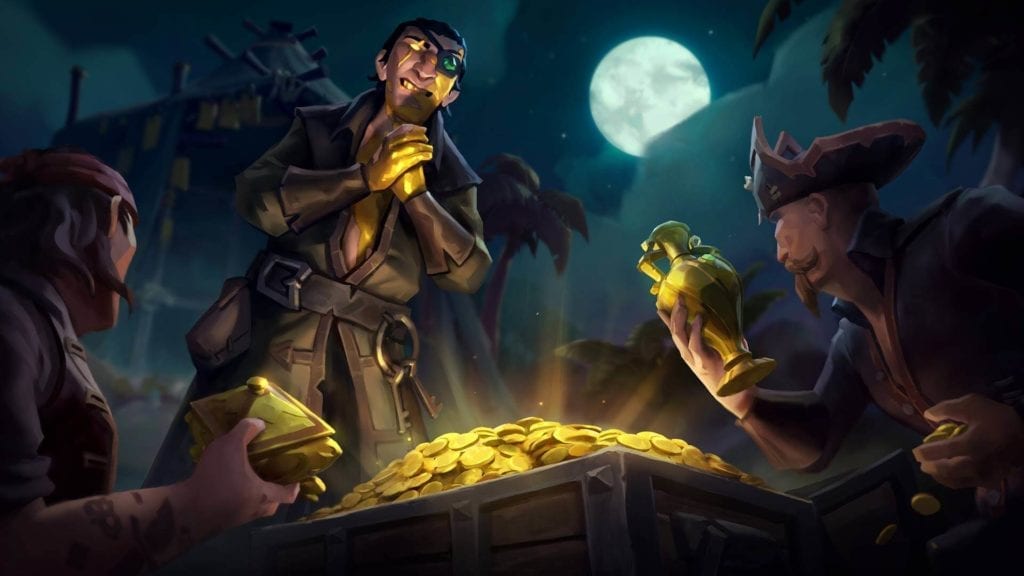 Sea of thieves, after a long year of sailing.

Unless you have been living under an internet free rock for the last year or so, you’ve probably heard about sea of thieves. If you haven’t, well then, behold an epic tale of treasure! Cannons! Piracy! And… bananas?

Now, Rare have always made an impact on the gaming industry with household names such as Banjo-Kazooie and Goldeneye. But sea of thieves, when it came out, it had a weaker reception than Sony’s 2006 E3 conference. Yeah, I’m talking that bad. Sea of Thieves was a fresh new game, out on 20th March 2018, it’s a true swashbuckling adventure. This pirate themed (can I call it a mmo? No, no I cannot, as 16 players is *not* massively multiplayer) game has been through several alpha and beta tests which I’m sure many of the community have invested hours into. And upon its release, nothing much had really changed.

But let’s drop anchor and dive in. Let me start with the first thing people notice when they see this game, the graphics, Yes they’re not great, we get it, but for a fun and truly massive gameplay experience, some sacrifices have to be made. That said, it is a beautiful looking game. Vibrant colours and glorious lights and shading over the horizons, not to mention the crystal clear northern lights in the sky, you can lose yourself just staring into the gorgeous surroundings and forget that the other pirates and sharks may not seem as realistic as you had hoped or imagined. Though rather cartoonish, its looks do not lower how amazing this game really has the potential to be.

Actually playing the game however, and this is purely my own opinion, I can personally find no clear flaws, the controls are simple, almost enough to pick up and play, and anybody used to a first person game will instantly feel at home with a flintlock pistol or blunderbuss in their hands. It may take some time to get used to raising the sails, pouring buckets of water out of your flooding ship or swallowing bananas while running away from a skeleton horde, it doesn’t take long at all to be playing as fluid as a pro.

While there is some kind of a complicated, hidden, not very well thought out and easy to miss story, it’s mostly the sense of freedom this game provides that makes it worthwhile. If you want to follow treasure maps, solve cryptic clues and find hidden gold, you can do that… or you can be a pirate and just take everybody else’s by force. There’s also many other things to do, you can freely explore other islands, take missions to defeat undead captains or just chill out in a tavern drinking grog until your screen and the floor is covered in a disgusting green haze.

Allow me to take you through a day in the life of a pirate. Once you’ve created your pirate, dressed them accordingly and outfitted them with your purchased (with in game gold) tools of chaos, you can embark on your ship, there are different kinds, for solo, duo or team players. For you fans of customisation, you can change the sails, head and maybe some other aspects of your ships looks. Gather your crew, raise the anchor, lower the sails and head to wherever you want. You can vote on a quest or head down and check the map. But be warned, while below deck, you can’t see any other players out at sea looking to score your booty.

Full engaging story? Nope… Competitive multiplayer? None of that either sorry.

Chosen your location? Good, now head back up and feel free to pass the time playing some music or dancing with your crew. From the crow’s nest you hear the bell ring, a crew member has seen another ship! Load the cannons, and sink it quick, or if you’re like me, hope they pass peacefully. Out of cannonballs? No problem! Load yourself into the cannon and aim true, you can launch yourself onto an enemy ship if you’re lucky, and either steal their chests out of sight, drop their anchor to make them a sitting duck (no pun intended) or sabotage them by taking their ammunition. Armed with a sword and gun you could be brave and try to take out their crew. Job done, head back to your own ship and reunite with your crew.

Heading towards the coast, sun rising over the horizon thanks to the games full day/night and weather cycle, you look up and see clear skies and good winds, plain sailing ahead! Don’t get too close to land or you’ll have some ship damage to repair, drop too early and you’ll need to swim to shore. But that’s okay, if you don’t mind sharks. Lots of sharks. Big ones too. Once you’ve been joyfully eaten alive, you awake upon the ghost ship, words cannot describe the eeriness of this floating wreck, ominous sounds and floating shards of wood as you get carried across a Black Sea by the ferryman himself, you, and the glowing ghosts of other players who have died in the area, until the door breaks away for you to respawn.

Back onto your ship now, with the help of a magical teleporting mermaid, yes you read that right, you scour the island with your crew. Salvaging planks, cannonballs and bananas, this games equivalent of a health pack. Look at your map and solve the riddles, telling you to march a certain amount of pace, so pull out your compass, reach the spot, pull out your shovel and strike gold. If you’re lucky enough to grab the chest and make it unscathed, as the noise of invasion would probably wake up the undead skeletal pirate army who wander the island, armed with guns, swords and beastly accuracy on the shore mounted cannons, you can sail towards an outpost, sell your chest, claim the gold, and relax while you await your next adventure.

Sounds fun I hear you cry, what could be wrong? Well, that is all there is to it. Full engaging story? Nope… Competitive multiplayer? None of that either sorry. This is a full exploration game, so it needed some buffs. It has taken a year, or 3 grand theft auto loading screens depending on how you measure time, to improve on this. Now we have hunting, fishing, the arena, and several new quests and stories to take part in.

Let’s take a look, have Rare salvaged this? Or is it off to Davey Jones locker with them? First of all, and now, please remember, I am a huge pirate fan, and I love fishing. So, fishing in a pirate game should naturally be a favourite thing of mine. I could not be more disappointed. The controls for the fishing seem to be ripped straight out of far cry 5, yet the ingenuity and variation of the fish comes from possibly the most generic children’s book out there. If you’re sick of finding this green fish, try going for a blue one! I mean, yes, there are several different fish, found all over, some even exclusive to the “new” volcanic islands. But fishing seems hardly worth it, cooking and eating them for food is great sure, but with the addition of new fruits for pirates to gobble down, we are never short of a tasty morsel to devour, so why spend time? Sell it maybe, to the trade merchants? Not worth the coin, especially this far into the game, making hundreds of thousands of gold pieces.

Hunting I would say is similar, a few slashes to a chicken or blunderbuss that adorable gold piggy that just wanted to be friends. Again, not worth it, maybe a little fun at first, but time consuming. Now, this isn’t always true. The kraken and megalodon can also be hunted. And eaten. Who doesn’t love digital calamari that only cost half of your crew to obtain? So there are some benefits there, and in traditional modern gaming fashion, it can unlock cosmetics. For free though, this isn’t EA.

Arena, this is where the fun begins. People wanted a PVP area now they have it – though in a separate menu, can’t really observe while questing, just got to hope to find some fighting players instead.

This is a breath of fresh sea air though. Placed into teams to fight it out for gold, prizes, and again, cosmetics. The fighting itself has evolved, as well as the cursed cannonballs, adding effects such as locking your wheel, or even putting crew to sleep, damage is now localised. Can’t run away if their mast is laying across the deck. This is for both arena and normal mode by the way, so you don’t have to decide which route to go for. Now that I think about it, arena isn’t really worth the time either. Unless you want some sweet red sails. If you choose those over the other sails….

Now, the main part, everyone can now please just quit moaning there is nothing to do. Quests. And a lot of them. In multiple parts. Each comes with a full story, and unlockables in accordance to how well you do. “But dwarf, it’s all the same gameplay” well, it’s a game. It is no different than opening a door in slow motion and machine gunning a terrorist, or driving a supercar from one side of the street to another. Gameplay will always be repetitive. Right now, it has become more of an excuse to find something wrong with a game rather than enjoy it. Plus, with the ability to team up with other player ships now, or even mark yourself as a rogue so every player on the server can find your ship on the map, you can choose how you want to play. Provided you don’t start a fight with the near impossible skeleton crewed ships that will, for no reason, ruin your day and make you cry. Speaking from experience here.

These are just some of the countless ways you can spend your time in Sea of Thieves, all in all, I would say is a true masterpiece of a game, beautiful, vast, fun and a great way to kill time and live out that pirate fantasy you’ve always dreamed of. It has its flaws sure, but what doesn’t nowadays? I mean, it’s available on game pass, so what’s the harm in trying it?

As always, this is A Nerdy Dwarf, hoping to see you all coming over the horizon, and join me sailing the high seas! Oh and guys, keep an eye out for the kraken. It’s real and it’s angry over all the tentacle jokes.