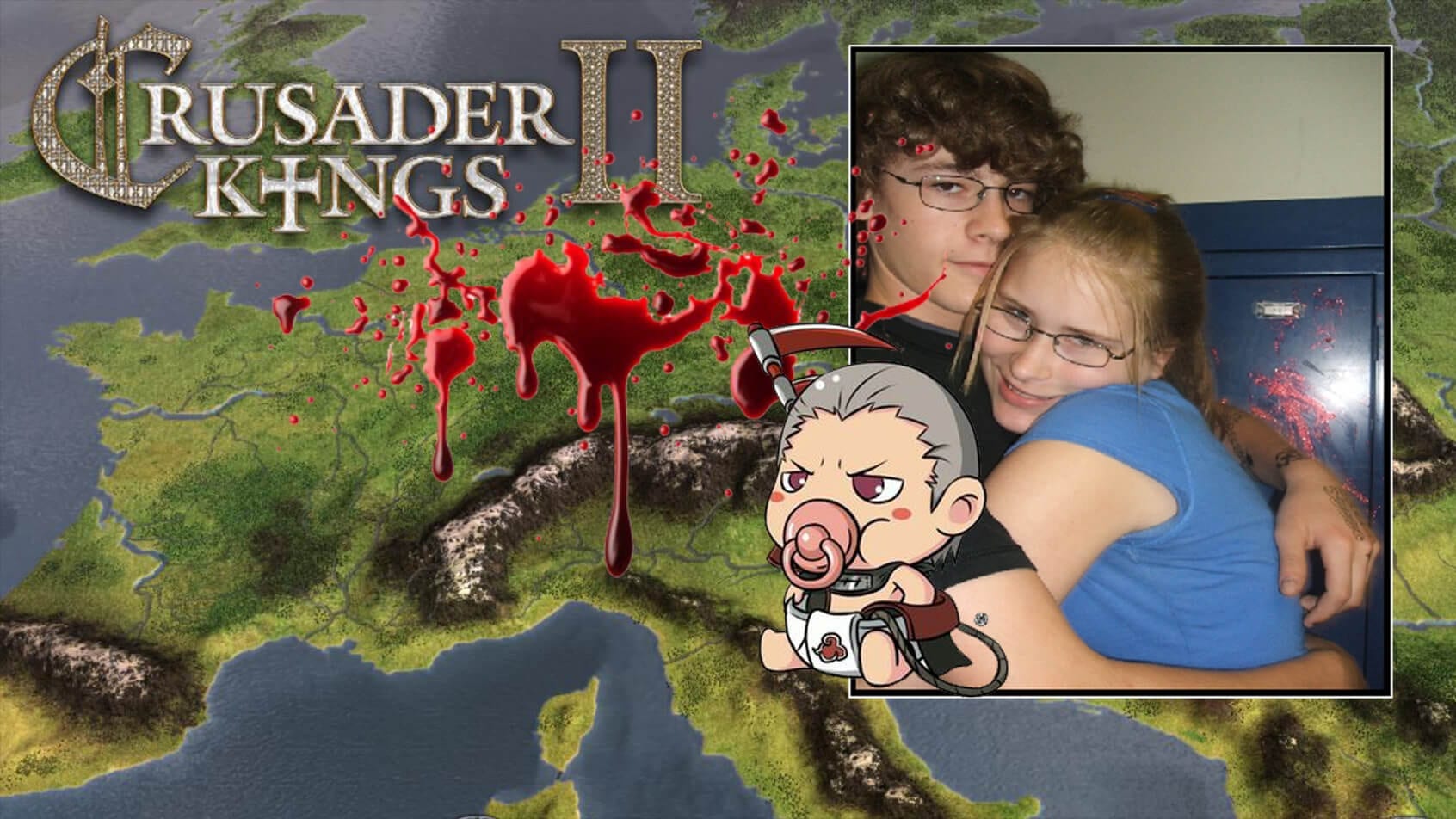 Some might say it’s too late to review an 8 year old game, to those I people I say “TO THE DUNGEON”.

ut with Crusader Kings 3 on the horizon I wanted to look back at what can best be described as the greatest incest simulator ever made.

In the broadest of strokes: Crusader Kings has you select a kingdom of your choosing between the years 867 to 1337 (if you’re in it for the long haul) and attempt to build a kingdom that stands the test of time.

The interesting thing about this whole experience is that it isn’t about the land you hold or the army you keep, it’s the family name that matters. The whole score system is built around the how long and how well your family has risen through the ranks and the impact they’ve made on medieval Europe. Which of course, leads us to the incest.

Your leader may change, but the family lives on. You will go through multiple generations. So holding onto whats already yours is the name of the game. Here’s an example:

Your character is a king of a small patch of land. He’s led a long life, has a beautiful wife and you’re looking at your heirs with pride, content that your land will prosper. But wait! You just realized your kingdom will be shattered and split up between your heirs. So what do you do? Maybe a conversation about what’s best for the kingdom is your top priority? WRONG NERD. This is a game, so obviously you marry off your son and daughter and murder your other offsprings to secure the future.

Looking at it another way, this is a game entirely based on lies and deception.

Let’s say you’re a Duke. Through marriage, you are about to inherit the biggest kingdom in your general vicinity. You’re wife is an only child so it looks like you’re set for life.

You’re father-in-law presents his new bouncing baby-boy for all to see. He’s heir to everything, and as sexism is actively encouraged your wife will loose everything she has ever dreamed of. What do you do?

Do you resign yourself to the thought that this was meant to be and you should roll with the punches? Or do you destroy everything you have built over the last 7 hours of blood, sweat and eye strain. Everything. Gone.

When I say everyone, I mean everyone, can be victim to plots of murder. Don’t like the way your courtier talked to you? Murder. Mistress getting ideas? Murder. Newly born heirs? Unfortunately, Murder.

Now throw in that all characters have their own goals, opinions and can murder each other to progress their own desires – along with a dash of religious tension, politics and a insatiable lust for gold – and you’ve got Crusader Kings 2.

If you love menus and stats you’ll dig it. As that’s all the game is

On top of this characters come with specific traits to their personalities, some of which are inherented through birth. So in many playthroughs I’ve caught myself conducting weird, medieval eugenics programmes to breed a race of super beautiful/intelligent beings.

And everything I just described barely scratches the surface. Do you want to be a Viking overlord, raiding and plundering your way across the seas? Cool, Done. Take part in the crusades on either side? Alright.

There’s even a feature to continue your save in Paradox’s other grand strategy game, Europa Universalis 4. Meaning you could end up playing a game that lasts around 800 years. It’s definitely impressive how well it syncs up between the two games for continuous flow.

Sounds pretty good right? And it is. It’s a massively addictive game that I wish was more popular. The biggest problem lies in how complicated and how user unfriendly the whole experience is…

If you love menus and stats, you’ll dig it. As that’s all the game is, menus upon menus to describe other menus. A text based RPG for the masses I say!

But the biggest crime of all is the sheer amount of paid DLC. It’s genuinely breathtaking. As of the time of writing, the base game is free to play on Steam. But without DLC I can’t recommend it.

The features you have to pay for really make for a full experience, especially one noteworthy DLC that is a historical switcheroo which sees the Aztecs discover Europe first and what happens next can only be described as painfully ironic. It’s terrifying.

However the price of all the DLCs currently comes to a ridiculous £220.

I’ve talked about marrying your family to each other until they resemble a carnival freakshow whilst randomly murdering children – but that price is truly barbaric.

£10 here and there over the course of 8 years is reasonable, but I think that initial shock will be enough to scare most people away.

So this is why (if you hadn’t already realised) it’s greatest game you will never actually play.

But if you can look past all of that and see the gold that lies beyond – a true RPG where you can construct your greatest imagined and elaborate schemes via your epic lust for power – lies in wait.

Oh, and you can join a satanic cult to become the devil and marry a horse. SOLD. Z